When it comes to analyzing network traffic, nobody does it better than Wireshark. It is the de facto (and frequently de jure) standard in many for-profit and non-profit businesses, government agencies, and educational institutions because of its ability to provide granular visibility into network activity.

In 1998, Gerald Combs initiated the development of Wireshark, and since then, networking specialists from all around the world have contributed to its success through their own free time.

To name only a few of Wireshark’s many features:

When using gzip to compress capture files, the data can be decompressed instantly. 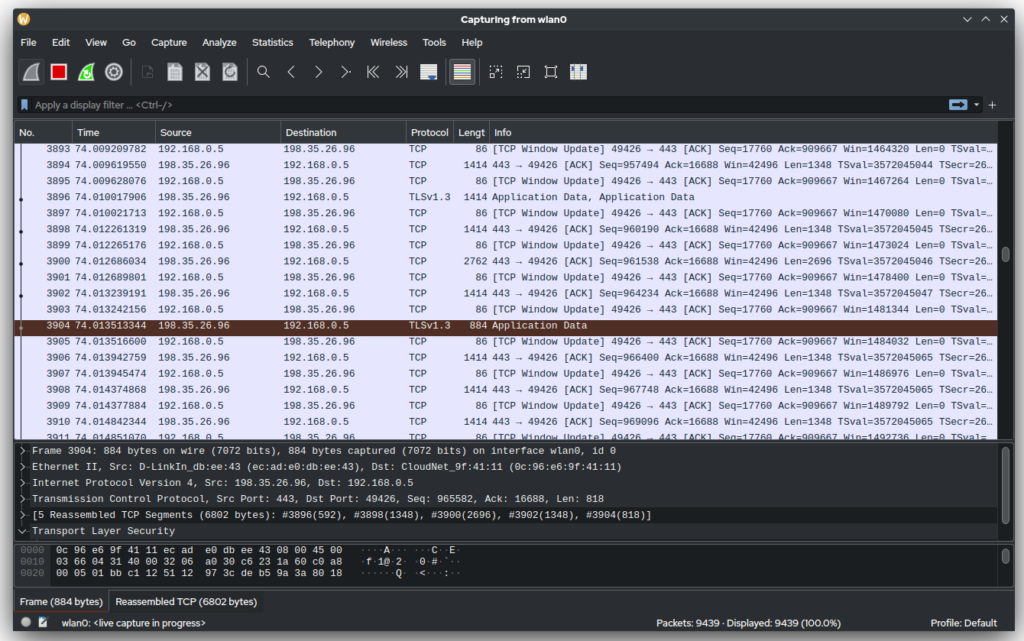 Network protocols such as Ethernet, IEEE 802.11, PPP/HDLC, ATM, Bluetooth, USB, Token Ring, Frame Relay, and FDDI can all have real-time data read from them (depending on your platform)

Support for decryption of a wide variety of protocols, including IPsec, ISAKMP, Kerberos, SNMPv3, SSL/TLS, WEP, and WPA/WPA2.

Wireshark: what is it?

The open-source software Wireshark is the gold standard in network protocol analysis. Wireshark is supported by a worldwide community of network engineers and software engineers that regularly upgrade it to accommodate emerging network standards and secure communication protocols.

Wireshark is used by the government, businesses, charities, and schools for debugging and training purposes. There is no better way to study the nuts and bolts of networking than through analyzing traffic with Wireshark.

Wireshark is only to be used on networks where packet inspection is permitted. To examine packets with Wireshark without authorization is a crime.

What is the function of Wireshark?

Wireshark offers a wide range of applications, one of which is diagnosing and fixing performance issues in computer networks.

In the field of cybersecurity, Wireshark is frequently used to track down connections, examine the details of suspicious network transactions, and spot sudden spikes in overall network activity.

It’s a crucial part of any IT professional’s arsenal, so long as that professional knows how to utilize it.

Why Use Wireshark and When?

Wireshark is a useful tool for teaching those new to information security about network traffic analysis, how communication works with different protocols, and what might go wrong.

Understandably, there are some tasks that Wireshark simply cannot perform. To begin with, it is useless to someone who doesn’t grasp network protocols. No gadget, however cutting-edge, can serve as a suitable substitute for learning.

What this means is that you will need to become familiar with the inner workings of networks before you can effectively utilize Wireshark. This necessitates familiarity with TCP, UDP, DHCP, and ICMP, as well as other protocols.

Second, under typical conditions, Wireshark cannot capture network traffic from every other system on the network.

Wireshark, like other common packet capturing tools, can only monitor traffic between your local machine and the remote system it is communicating with on current networks that include devices called switches.

And third, Wireshark isn’t an intrusion detection system, despite its ability to color-code and display incorrect packets (IDS). The fourth issue is that Wireshark is unable to assist in decrypting encrypted communication.

Finally, IPv4 packets can be easily forged. If an IP address is discovered in a captured packet, Wireshark cannot verify its authenticity. A little more IT expertise and some extra programs are needed for that.