With a projected net worth of $3.5 billion in 2022, Oprah Winfrey is the richest female television host in history.

Winfrey is an American chat show host, producer, actress, and media entrepreneur from Kosciusko, Mississippi. ‘The Oprah Winfrey Show’ is Winfrey’s best-known project. This is the most-watched show in history, according to the Nielsen ratings.

‘Queen of Media’ Oprah Winfrey has worked with some of the biggest names in the industry, including Ellen Degeneres, who is also a well-known TV host.

Oprah Winfrey rose from poverty, abuse, and prejudice to become one of the most influential people on the planet. She was born Orpah Gail Winfrey on January 29, 1954. That was not a misspelling. Her given name was “Orpah,” a reference to the biblical figure in the Book of Ruth.

As a baby people regularly mispronounced the name “Oprah” which eventually stuck. She was born in Kosciusko, Mississippi. Her mother, Vernita Lee, was an unmarried teenage housemaid.

Her biological father, Vernon Winfrey, was in the Armed Forces at the time of Oprah’s birth. He eventually worked as a barber, coal miner, and city councilman. It has been rumored that her biological father might have been another man named Noah Robinson.

Oprah and her mother moved in with her grandmother when Oprah was a baby. The family lived in abject poverty, with Oprah famously being forced to wear potato sacks as school dresses. So she literally rose from rags to riches.

When she was six, Oprah and her mother moved to Milwaukee where her mother got a job as a maid. During this period, Oprah’s mother gave birth to a second daughter named Patricia.

In 2003 Patricia died from cocaine abuse at the age of 43. Another half-sibling, a brother named Jeffrey born to father Vernon, died in 1989 from AIDS.

When Oprah was 12, she was sent to live with her father Vernon in Nashville. At 13 she ran away from home to escape the abuse she experienced there. At 14 she became pregnant with a son who was born premature and died.

She initially attended Lincoln High School in Milwaukee but after excelling in a special program earned a transfer to an affluent suburban school called Nicolet High School. After getting into some trouble she went back to living in Nashville.

At East Nashville High School she started to blossom. At 17, Oprah won a Miss Black Beauty Tennessee pageant which led to a part-time job at a local black radio station called WVOL working as a news anchor.

She earned a scholarship to Tennessee State University, where she studied communication. At 19, Oprah left school to pursue a career in media full-time.

Oprah became the first black female news anchor at WLAC-TV in Nashville. She was also the youngest anchor in the station’s history. When she was 22 she was hired by a station in Baltimore called WJZ to co-anchor the six o’clock news, a coveted position.

In August 1978 she began co-hosting a talk show called People Are Talking. By 1980, she was beating the nationally-syndicated Phil Donahue in the local Baltimore market. By the end of her Baltimore run, she was earning $220,000 per year, which is the same as around $560,000 today after adjusting for inflation.

Recognizing her potential, in 1984 ABC gave Oprah her very own 30-minute morning talk show in Chicago to be produced by a company called King World Productions. King World was also the production studio behind Jeopardy and Wheel of Fortune. 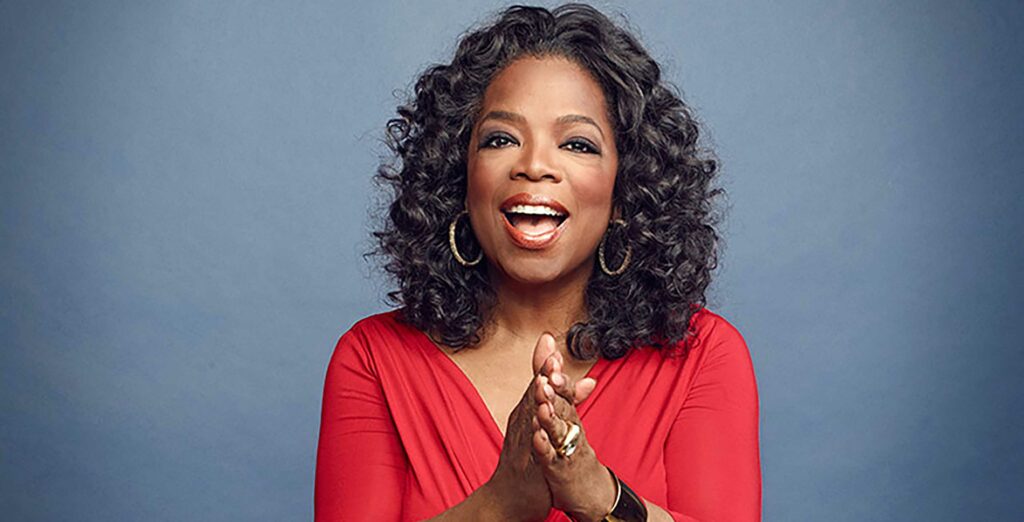 The job came with a four-year, $1 million contract. After adjusting for inflation, $250k per year at that time is the same as around $600k today.