HomeNetflixMoney Heist Season 5: Who Dies In The End! SPOILERS!
Netflix 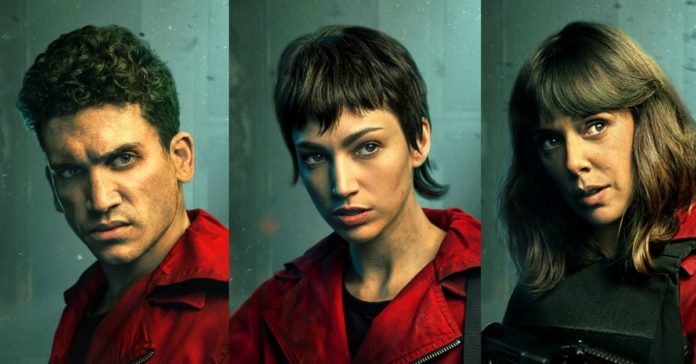 The Money Heist has come to an end on Netflix with Part 5 Volume 2. But who dies in the finale of the TV series?

The Ending of Money Heist: Who Dies?

The last five episodes of the Spanish TV series of Netflix, uploaded to the streaming platform on 3 December 2021, come after the heist of the century. Tokyo is dead, but she managed to take all of Sagasta’s men with her, except the latter and two soldiers.

To deceive the Gang, the robbers report that only two have survived, while the third, Sergeant Arteche, hides in the ventilation ducts and proceeds to deactivate the explosive charges in some access points to allow the entry of Police and army at the right moment.

Sagasta negotiates with Lisbon and the others and obtains permission to take two surgeons to look after her injured partner. The two, also soldiers and therefore ready to act as reinforcements from the inside, also deal with Helsinki. Deactivated the last explosive charges, the Police can break into the bank, arresting all robbers.

At that point, Tamayo informs the Professor – on the trail of gold – of the situation. Sergio promises to surrender himself, guaranteeing that he will then be able to leave the building together with his companions. The whole Gang is finally reunited. Not knowing, however, where the booty is, the colonel decides to declare the operation still in progress, convinced that he can extort that information.

He soon realizes that he will never know where the bars are, and in the meantime, the press has learned that the gold from the state reserve has disappeared from the bank. To try to save the country’s future and its image, Tamayo is forced to reach an agreement with Sergio. So he holds a press conference in which he reveals that the bars have been found.

Does anyone die in the finale of the Spanish series?

At that moment, the trucks with the gold arrive at the bank, but in reality, it is only brass. When  Tamayo finds out that he has been teased, he is ready to sacrifice any member of the Gang, all of whom are being held at gunpoint by some agents. Who dies, then, in the finale of Money Heist? Separated from the others, the Professor and Lisbon try to convince the colonel to keep the secret, showing him the positive sides for him and the country itself.

At that moment, a few bursts of bullets can be heard outside the building from inside the bank. Then follows a second press conference, in which Tamayo announces the end of the robbery, the death of  Rio, Bogota, Manila, Pamplona, Helsinki, Stockholm, Palermo, Lisbon and the Professor, following their resistance, and the collaboration of  Denver, which is offered a settlement and witness protection.

This is also part of Sergio’s plan. In body bags, the robbers managed to get out of the bank alive and well. Within 24 hours, they are reunited with Denver, and everyone is preparing to start a new life. In the finale of Money Heist, therefore, no one dies.