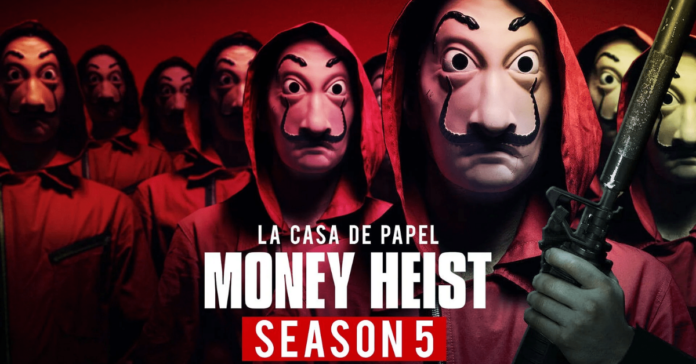 Money Heist, without any doubt, is one of the greatest Netflix hits of all time. The show initially premiered on Spanish network Antena 3, but it became a worldwide phenomenon after Netflix bought the rights of the TV show.

Created by Alex Pina, the show’s storyline revolved around a multi-day heist in the National Mint of Spain. The biggest robbery in the history of Spain, planned by a mysterious man ‘The Professor’ and his team of eight people.

Over the years, four seasons have been released, and the second part of the fifth season will be the last.

The first part of the fifth season was released in September 2021, and as reported by Netflix, the second part will hit the screens in December 2021. The last season faced a delay, and every credit for it goes to the Covid-19 pandemic.

Money Heist Season 5 Part 2: Is There A Trailer?

Money Heist: No Season 6 But A Spin-Off

We won’t be spreading false rumours. Money Heist won’t be returning for a sixth season, marking its Season 5 Part 2 as the final set of episodes where we see the whole gang together. Creator Alex Pina revealed in an interview that he rewrote the ending of the show 33 times to make sure it was perfect. The end of the series is a fact, but the story will continue one thing or the other.

Alex Pina, the man behind the show, has confirmed that ideas about potential spin-offs have been discussed. We currently don’t know which character will be getting a spin-off, but something will undoubtedly be coming after the end of the worldwide phenomenon ‘Money Heist.’