Jerry Springer is an American television host who was born in England and has a net worth of $60 million.

Without a question, Jerry Springer is best known as the host of “The Jerry Springer Show,” a tabloid talk show that began as a political commentary show in 1991 but changed to tabloid news in the mid-’90s to boost ratings.

Gerald Norman Springer was born in Highgate, London, England, on February 13, 1944. During World War II, he was born in the London Underground station of Highgate, where civilians were fleeing German bombing.

His parents were Germans who managed to flee the Nazis. Sadly, several members of Jerry’s family, including his maternal grandmother, died in concentration camps. In January 1949, he and his family moved to Queens, New York. Jerry was a Forest Hills High School student. In 1965 and 1968, he received his undergraduate degree from Tulane University and his J.D. from Northwestern University, respectively.

Springer worked as a broadcaster for WTUL New Orleans FM, a student radio station, while an undergraduate at Tulane University.

Springer featured as the host of a talk show called The Masculine Feminist in an episode of Married… with Children, in which he campaigned for women taking over the men’s bowling night and finally taking over a bowling alley.

Springer’s show is taken over by Al Bundy and his cronies, who tie him to a chair and replace him with a stripper who leaps up and down to the amusement of the audience.

Springer played a talk show presenter named “Jerry Farrelly” in the 1998 film Ringmaster, which was loosely based on himself. Ringmaster gives viewers a behind-the-scenes glimpse at potential guests for a Springer-style show. Springer also published Ringmaster, an unconnected autobiography, in the same year. “I can only think of one title a year,” he joked.

In 2004, he starred as President of the United States in Dolph Lundgren‘s film The Defender.

He played Wayne, Benny Lopez’s ex-boyfriend, in multiple episodes of George Lopez, and he made a special appearance on Days of Our Lives in July 2007 as “Pete,” a high roller in Las Vegas who helped Nick Fallon win $50,000.

Springer made a cameo appearance as a “random” audience member on Late Night with Conan O’Brien on October 19, 2007.

He made a brief appearance as Billy Flynn in Chicago at the Cambridge Theatre London in June 2012, alongside Aoife Mulholland and Leigh Zimmerman. In episode 2 of the Netflix sitcom Happy!, he made a guest appearance as himself. He made guest appearances on Roseanne in an episode from the ninth season and The X-Files episode “The Post-Modern Prometheus” in 1996. In the Halloween episode of The Simpsons titled “Starship Poopers,” he voiced a cartoon version of himself, and in the same year, he appeared as himself on an episode of The Wayans Bros.

With his talk show, he appeared in the third season of Sabrina the Teenage Witch’s episode “Mrs. Kraft” in 1999. He also appeared in an episode of Space Ghost Coast to Coast the same year. On Austin Powers: The Spy Who Shagged Me (1999), he made a cameo appearance as himself in an episode of his show starring Dr. Evil and his estranged son Scott Evil.

In an episode of Gary & Mike with a parody of his talk show in 2001, he featured as a claymation version of himself. He made an appearance as himself on MADtv episode 1301 in 2007. 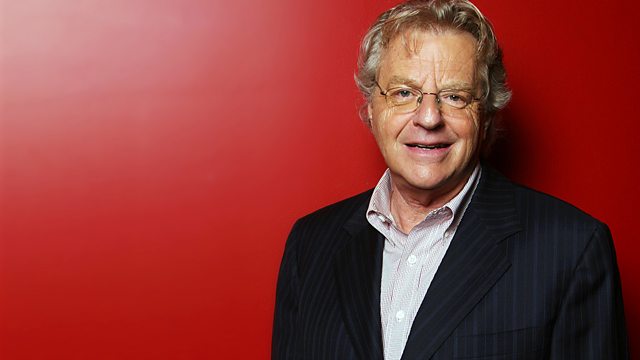 He was a guest on the British game show Countdown in 2009. In April 2009, Springer, Davina McCall, and Alan Carr appeared on the Chris Moyles Show. Springer appeared on The Andrew Marr Show on May 31, 2009, to discuss politics and his next ventures.

In his weird radio series Blue Jam, humorist Chris Morris interviewed him (Series 2, Episode 6). Springer was featured on an episode of This American Life titled “Leaving the Fold” on January 23, 2004.

Springer and his professional dance partner, Kym Johnson, competed on the third season of Dancing with the Stars in late 2006. He wanted to be on the show so he could master the waltz for his daughter Katie’s wedding. In the seventh week of the competition, Springer and Johnson were eliminated.

On August 27, 2008, Springer participated in an episode of the BBC One television programme Who Do You Think You Are? In the episode, he travels to Poland, where he learns that the Nazis sent his maternal grandmother to the Chemno extermination camp, where she was murdered.

In what is now the Czech Republic, his paternal grandmother died at the Theresienstadt concentration camp. When he discovered how they died, he sobbed freely.