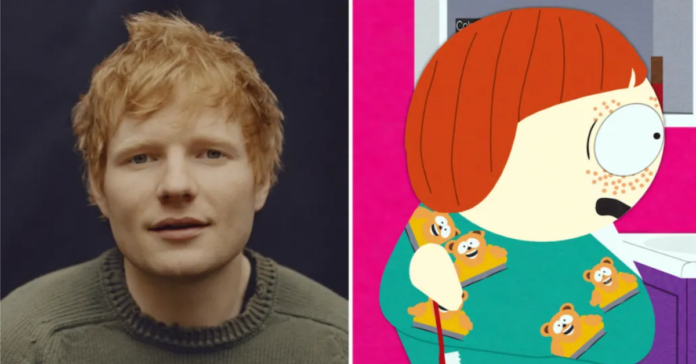 One particular episode of “South Park” made life difficult for Ed Sheeran. He revealed what it was and why it hit him that way in a recent interview.

Can a cartoon series ruin other people’s lives? World star Ed Sheeran would answer this question with “yes” because a “South Park” episode is said to have been the trigger that not only made life difficult for him but also other people. This is the episode “Ginger Kids” in the ninth season.

This is where people with red hair are specially made fun of. At the time, according to Ed Sheeran, it was common in Great Britain, but Americans “didn’t even know what a redhead was until then.” But that changed suddenly with the “South Park” episode. But how can one episode of a cartoon series go so far that even lives are ruined?

Cartman incites his schoolmates against them in the Southpark episode with a lecture on “Ginger Kids” (red-haired, pale children with freckles). He presents them as soulless monsters and blames him for “gingivitis”. Now, usually, everyone would think: “That bullshit.” And that’s precisely what it is. But it had a significant impact on Ed Sheeran back then: “I came to America before, and every one said to me ‘I love your hair’, and I was always amazed about it. Then this episode came out, and that was it for me. Worldwide and for the rest of my life.”

Inspired by the episode, the Facebook event “National Kick a Ginger Day” was launched in 2008. Ed Sheeran has no animosity towards the series but would even speak to a character if the opportunity arises.

Ed Sheeran is pulling out of the music business. You rarely catch him at big award shows. But not because the singer became a dad last year. There is a much more blatant reason for his absence, as he revealed on the Audacy’s The Julia Show podcast. Ed Sheeran criticizes award shows in America and describes them as “uncomfortable” and “terrible”.
The singer was recently at the MTV VMAs 2021 and asked the presenter what viewers don’t know about such events. The “Shivers” singer replied fairly honestly: “The room is full of resentment and hatred towards everyone else, and it’s a pretty uncomfortable atmosphere. There are just many people who want to see others fail and I don’t like that. I always feel bad when I leave these events.” We imagined it differently.