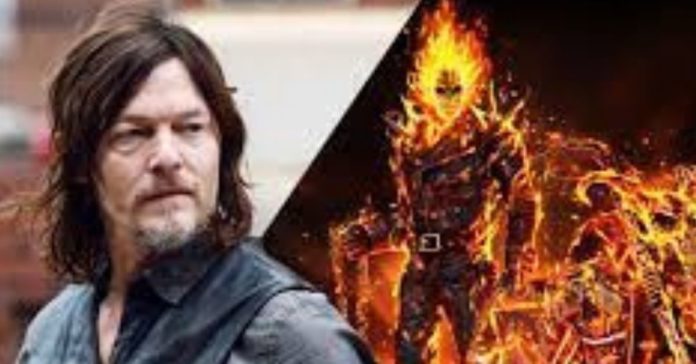 In addition to many other Marvel projects, “Ghost Rider” should also come back to the big screen in the future. Acting enfant terrible Nicolas Cage embodied the anti-hero and cursed bounty hunter in “Ghost Rider” (2007) and the sequel “Ghost Rider: Spirit of Vengeance” (2012). A leading actor is currently being sought for the planned new edition.

And “The Walking Dead” star Norman Reedus (Daryl) now throws his hat into the casting ring. For example, Norman Reedus (@wwwbigbaldhead) has already liked the following tweet in the past few days:

And now showrunner Angela Kang and Chief Content Officer Scott M. Gimple jump to the side of “The Walking Dead” star. Kang stated in a new tweet: “Norman Reedus as a ghost rider would be great,” whereupon the TWD chief Gimple pushed a GIF of Reedus while swinging a chain and following the heads of walkers. Check out Kang’s tweet and Gimple’s response below:

In the summer of this year, Norman Reedus, the “The Walking Dead” star from the very beginning, declared: “I want to play Ghost Rider.” (via Comicbook.com ). “I want a flame skull. I want my face to turn into a flame skull and I whip around a chain. That would be great.”

Gabriel Luna Is Also On The Queue

Moreover, the Agents of SHIELD alum Gabriel Luna has also come forward with his interest in playing Ghost Rider in the MCU. Marvel has recently drafted possibilities of a Ghost Rider reboot. The plan seems more credible after the constant success of its shows on Disney+.

Gabriel Luna said that he would be more than happy to play Ghost Rider in the MCU. The actor responded to a fan who tweeted that they want to see MCU run Ghost Rider back with Gabriel Luna. Replying to the tweet, Luna tweeted,

The actor was last seen in Agents of SHIELD as Robbie and became the first actor to play Ghost Rider in a tv show. The character was also rumoured to get his own spin-off series at Hulu, but Marvel later pulled the plug as they turned towards Disney+ for productions. Over the years, a Ghost Rider reboot has been looking more and more crystal clear. There are rumours that Norman Reedus and Keanu Reeves are also in talks for MCU’s Ghost Rider, but Luna’s return would eventually make more sense contrasting on his portrayal of the character previously.